What is climate change?

Solar energy enters our atmosphere as shortwave radiation in the form of ultraviolet rays and visible light. The Earth's surface absorbs some of this energy and heats up. The Earth cools down by giving off a different form of energy, longwave infrared radiation. But before all this radiation can escape to space, greenhouse gases in the atmosphere absorb some of it, which makes the atmosphere warmer. As the atmosphere gets warmer, it makes the Earth's surface warmer, too. In the absence of any atmosphere, the upward radiation from the Earth would balance the incoming energy absorbed from the Sun at a mean surface temperature of around -18°C, 33° colder than the observed mean surface temperature of the Earth, which is 15°C. This process is referred to as the natural greenhouse effect.

The higher concentration of greenhouse gases (like carbon dioxide, methane, and nitrous oxide) in the atmosphere caused by human activities means that more radiation than normal remains trapped in our atmosphere. This creates an enhanced greenhouse effect. 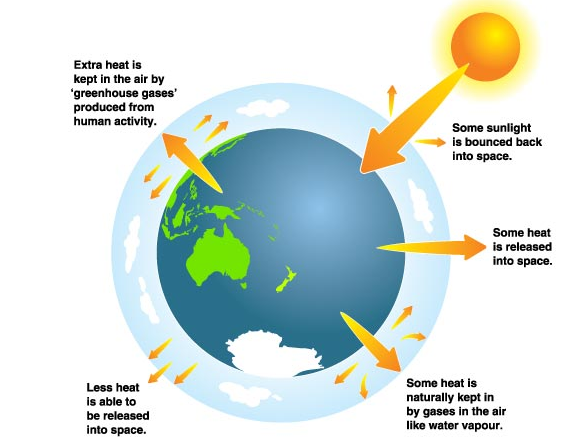 Source: http://www.climatechange.govt.nz/science/what-is-climate-change.html
Natural processes have changed the Earth's climate dramatically over the last 4.6 billion years. Over time, natural fluctuations in climate have caused the Earth to become, at various times, very cold and covered in ice, and very hot. In the past 10,000 years the planet’s climate has become increasingly stable, allowing for a flourishing flora and fauna, as well as a massive increase in human population.
However, over the past 50-100 years, warming at the Earth's surface has increased significantly and many of the observed changes since the 1950s are unprecedented over decades to millennia. Since the industrial revolution, the atmospheric concentrations of the main greenhouse gases - carbon dioxide, methane, and nitrous oxide - have increased to levels unprecedented in at least the last 800,000 years. Carbon dioxide concentrations have increased by 40% since pre-industrial times, primarily from fossil fuel emissions and secondarily from net land use change emissions. The ocean has absorbed about 30% of the emitted carbon dioxide from anthropogenic (human) activities, causing ocean acidification.
The latest Intergovernmental Panel on Climate Change (IPCC) AR5 Working Group I Report concludes that human influence on the climate system is clear and that it is extremely likely that human influence has been the dominant cause of the observed warming since the mid-20th century. Human influence has been detected in warming of the atmosphere and the ocean, in changes in the global water cycle, in reductions in snow and ice, in global mean sea level rise, and in changes in some climate extremes. 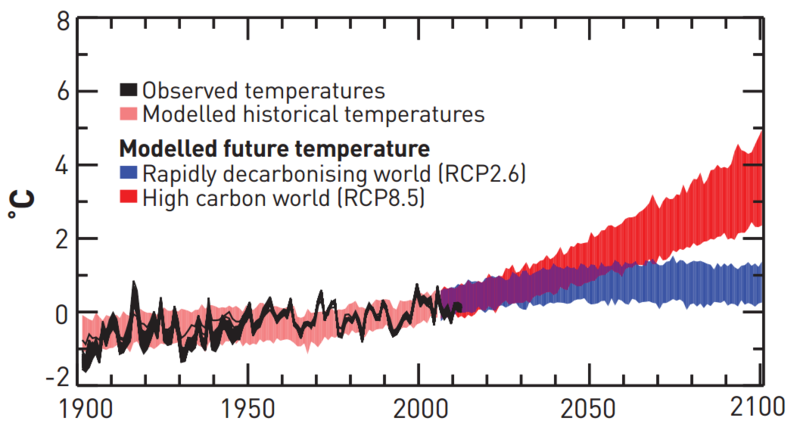 What are some of the projected climate changes facing the Wellington region?

-Sea level rise - currently tracking towards a 0.8m rise by the 2090s or ~1m by 2115 compared to 1990.
-Wind- the frequency of extreme winds over this century is likely to increase by between 2 and 5% in winter, and decrease by a similar amount in summer.
-Changing rainfall patterns – overall there is expected to be a small increase in rainfall in the west of the region and a decrease in east. Very heavy rainfall events are likely to become more frequent.
-Temperature rise - likely to be around 0.9 degrees celsius warmer by 2040 and 2.1 degrees celsius warmer by 2090, compared to 1990.

These Wellington region projections are based on data contained in the 2007 IPCC Fourth Assessment Report, downscaled to the regional level by NIWA.

The IPCC Fifth Assessment Report was released in stages in 2013/14. Regional downscaling of climate projections from the latest IPCC report is currently being undertaken by NIWA as part of the “Climate Change Impacts and Implications in New Zealand” project. You can see the work on the project web page: http://ccii.org.nz/research-aims/ra1/
Three key risks for New Zealand are identified in the IPCC Working Group II Fifth Assessment Report:

1.  Increased frequency and intensity of flood damage to settlements and infrastructure

2. Increased damage from wildfires – to ecosystems and settlements, economic losses and risks to human life in many parts of NZ

3.  Increasing risks to coastal infrastructure and low-lying ecosystems from continuing sea level rise, with widespread damage if the more severe projections are realised.

What responsibilities does Greater Wellington Regional Council have that relate to climate change impacts in the region?

How are the projected climate change effects likely to impact some of the services carried out by Greater Wellington Regional Council across the region?

-Uncertainty around how ecosystems will respond- some vulnerable sites may become unviable
-Changes in storm and rainfall intensity are predicted to increase disturbance to terrestrial and aquatic communities
-Ocean acidification is expected to cause declines in carbonate communities
-Sea-level rise is likely to impact on coastal biota, altering/ moving coastal habitats, changing inundation patterns, and increasing vulnerability to storm surges and tides
-Changes to flora seed production related to warming e.g. increased in beech forests
-Changes to fauna breeding patterns e.g. earlier egg laying in some bird species
-Climate changes may influence fertility, recruitment and mortality rates
-Decline in suitable bird habitat could increase the regional extinction risk
-Changes in marine species and habitat distribution e.g. giant kelp beds on the Wellington coast are at their northernmost limit and may be lost

-Impacts on pest distributions – climate change may expose the region to a significant number of pest organisms that are already established elsewhere in the country
-A warmer average temperature and milder winters will affect the existing introduced species in the region – some plant species will flower or seed more vigorously and some animals will have better breeding and survival success
-Changes in survival or spread rates increases control costs and could jeopardise biosecurity control programmes
-Climate change will lead to different land use by farmers and other industries, potentially exposing the region to different risks and pathways for pests.

-Floods are very likely to become more intense, resulting in increased risk to major infrastructure including failure of flood protection measures
-The onset of climate change and its predicted impacts on river flow and flooding is expected to further increase the risk to communities along the Hutt River, which is already prone to flooding
-Potential changes in land use or river channels over the 21st century could significantly affect the characteristics of the catchment and hence the magnitude and timing of flood events.

-Disruptions to rail and bus services due to storm events, coastal erosion and sea level rise
-Heat stress (buckling) affecting the national rail network as a result of high temperatures
-Inundation of low-lying coastal land transport infrastructure (road and rail) caused by sea level rise and storm surge
-Future flood risk under climate change for sections of the state highway and rail networks that are currently prone to flooding
-Inland erosion, instability, and increased rainfall pose a risk to road and rail networks and infrastructure

A changing climate will create both risks and opportunities for the Wellington region. Agricultural productivity could increase in some areas but there is also a risk of drought, and there will be significant costs associated with changing land use activities to suit a new climate. Forests and vegetation may grow faster, but native ecosystems could be invaded by exotic species, and the risk of wildfires will increase. People may enjoy the benefits of warmer winters but rising sea levels will heighten the risk of erosion, salt water intrusion and flooding, increasing the need for coastal protection.

Some communities are already struggling with coastal erosion and inundation risk, and the risks to coastal infrastructure and low lying ecosystems will increase with continuing sea level rise. Increasingly, the evidence strongly suggests that on balance the negative effects of climate change in New Zealand will outweigh the positive.

Councils are responsible for a range of functions & decisions that can affect and are affected by climate change. Ensuring that we have assessed the significance of, and are responding appropriately to, the causes and effects of climate change across our operations requires a strategic approach. The purpose of creating a Greater Wellington Regional Council Climate Change Strategy is to enable such an approach through the development of an overarching document to help align and coordinate climate change responses across regional council activities.

The climate change strategy will review and build on the good work already occurring, raise awareness of climate change drivers and impacts, and help strengthen information-sharing.

The benefits will be:

•A coherent, consistent, and proactive approach to climate change action
•A shared regional vision and direction for the council on climate change response
•Appropriate integration of climate change considerations into decision making and strategic planning processes.

Mitigation and adaptation - how do we minimise the impacts and adapt to a changing climate?

The first imperative of climate change action is mitigation: the reduction of greenhouse gas emissions and the sequestration of carbon through planting trees and preserving forests. Mitigation activities aim to address the drivers of human-induced climate change so that the worst impacts can be avoided. Mitigation is critically important in the long term. But even the effects of aggressive mitigation are not likely to be evident within the next few decades, given that climate change effects resulting from past and current emissions are already “baked in” to the system.

Section 7 of the Resource Management Act requires that particular regard be given to matters related to climate change. In a local government context, wherever current climate is significant to an activity, hazard, or plan, the impact of a changing future climate should also be considered.

The RMA Quality Planning Resource on Climate Change (2013) states that Councils should explicitly consider whether the effects of climate change have significant implications for:

The effects of climate change can also be integrated into councils’ longer term planning under the Local Government Act, as part of their mandate to meet the current and future needs of communities for good quality local infrastructure, local public services, and performance of regulatory functions in a way that is most cost effective for households and businesses.